Iconic depiction of the goddess revived to mark 25th anniversary 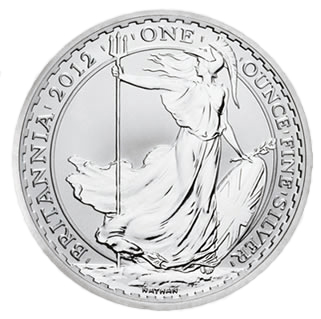 The Royal Mint is proud to announce the release of a commemorative Britannia £2 silver bullion coin for 2012. Designed by Philip Nathan, this celebration coin has been struck with his classic 1987 image of the powerful maiden to mark the 25th anniversary of Britannia bullion coins.

Since her first appearance on English coins in the seventeenth-century, Britannia has grown to become a powerful emblem, personifying the spirit of Great Britain.

Since her first appearance on English coins in the seventeenth-century, Britannia has grown to become a powerful emblem, personifying the spirit of Great Britain.

Philip Nathan portrays Britannia as a standing figure, depicting her in a classical, flowing gown, armed with her trident and shield and wearing a Corinthian helmet. He succeeded in creating an instantly recognisable female personification of the British Isles.

Britannia's first appearance on English coinage was on copper coins issued during the reign of Charles II. With the constitutional unification of England with Scotland in 1707 and then with Ireland in 1800, Britannia became an increasingly important symbol, her image becoming synonymous with national pride, unification and celebration.

The release of the 2012 Britannia coin comes at a particularly appropriate time, as the UK prepares to celebrate the Diamond Jubilee of Her Majesty The Queen and the London 2012 Olympic and Paralympic Games.

Commenting on the 2012 Britannia coin, Dr Kevin Clancy, Director of the Royal Mint Museum said: "Philip Nathan’s design captures Britannia in her full splendour and is itself a triumph of numismatic art. It draws its inspiration from a strongly maritime approach, Britannia windswept on a cliff-top, the very essence of authority and elegance. In such a momentous year for Britain it is entirely fitting for the coinage to be graced with an acknowledged masterpiece."

Philip Nathan has designed a number of other coins for the Royal Mint including a portrait to mark the late Queen Mother’s 80th birthday, an official coin design for Her Majesty The Queen and Prince Philip’s Golden Wedding anniversary.

The 2012 Britannia £2 Silver Bullion is priced at £59.99 and is available from 1st November 2011 from the Royal Mint’s website www.royalmint.com